The zombie: resilient, merciless, and prepared to chomp on anything in its path—we’ve all come to understand the characteristics of the undead as so. And while everyone loves a good symbolic metaphor and the occasional gory fun of a Z-flick, today we’re talking about a more pressing matter related to this insidious term: zombie cells. And if you’re in the business or market for anti-aging skincare, you’ll want to listen up.

Now, there is a more clinical term for such an occurrence. It’s called cellular senescence, and it's when a cell loses the ability to multiply (which is necessary for the skin to have fresh cell turnover). If the cell can’t multiply, it isn’t doing its job. But it’s also not simply dying and exiting the body, either, which is what healthy cells naturally do when ready. So it is not quite alive yet not quite dead either.

It also starts secreting inflammatory molecules, which affect the healthy cells beside it, recruiting them to its zombie gang, if you will.

Normally, our skin goes through a process called autophagy, or self-eating. The role of autophagy is quite valuable—it helps eliminate aged, damaged, or all-around misbehaving cells in order to make way for younger cells.

Akin to a zombie flick where a typical gunshot to the heart doesn’t work, zombie cells also have a hard time being defeated. In fact, they prevent the autophagy process from happening to them. 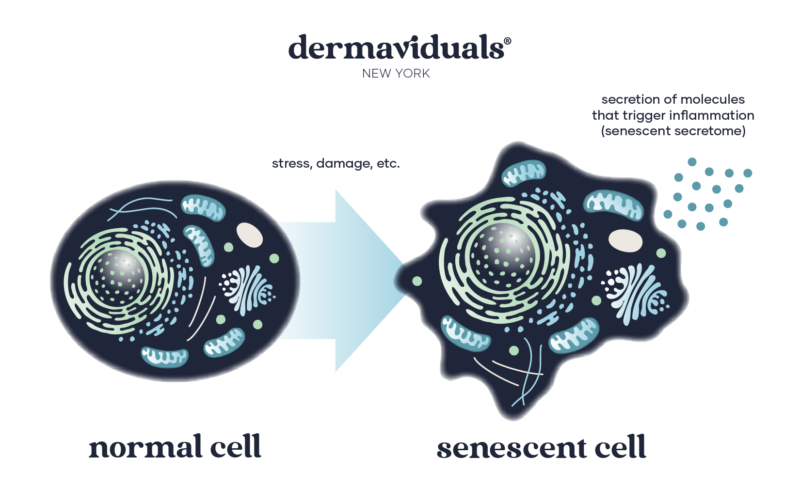 Now before you fear too much that your skin cells are turning into an episode of the Walking Dead, understand something important: it’s a natural part of aging. Every cell has the ability to turn into a senescent cell. And as you (and your skin) age, its immune system becomes less efficient, allowing senescent cells to accumulate and taint healthy cells. By age 60, it’s theorized that approximately 10% of all cells in the body are these Z-cells.

During the natural aging process, senescent cells throughout various layers of the skin accumulate due to intrinsic and extrinsic factors, which results in an accumulation of DNA damage—a key driver of skin cellular senescence and impaired differentiation.

Maintaining skin homeostasis (balance) depends on a network that anchors the epidermis to the dermis known as the dermal-epidermal junction (DEJ). Here basal keratinocytes communicate with dermal fibroblasts.

As the skin ages, this cellular communication center, if you will, becomes impaired. DEJ begins to flatten, and its anchoring structure is lost, which results in a loss of communication between keratinocytes and dermal fibroblasts.

This is worsened by senescent fibroblasts, which further impede the proliferation of basal keratinocytes. Poor wound healing, lines, wrinkles, inflammation, and pigmentation are hallmarks of aging and senescence skin. 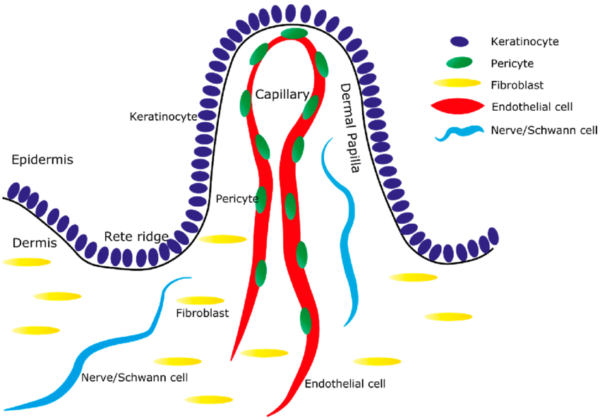 Studies show some senescent cells lay within the basal layer of the epidermis, but most are located within the dermis, where damaged senescent fibroblasts no longer support the cornification of keratinocytes. This leads to a loss of barrier defenses, lipid peroxidation, and DNA damage. This inflammatory and pro-oxidant environment are the main drivers for zombie cells (like the undead to brains).

That’s especially worrisome for individuals with chronic inflammatory skin conditions such as rosacea, atopic dermatitis, and psoriasis, where the skin loses control of regulating cell senescence and ends up with a destructive zombie. 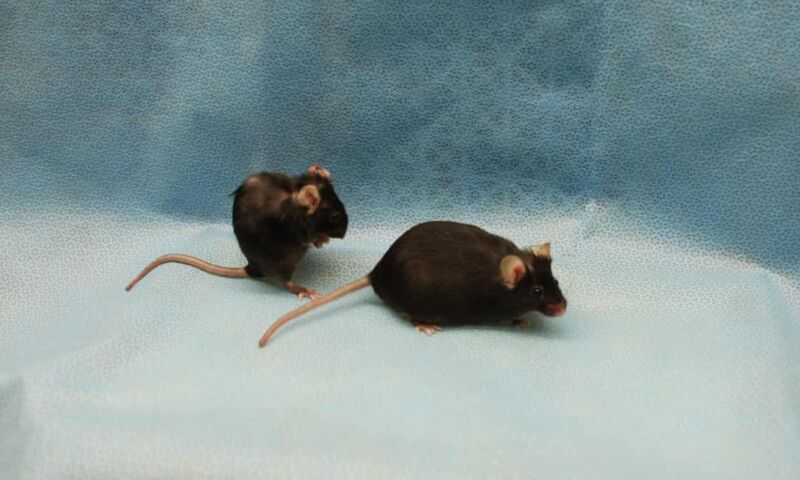 Twin mice the same age. The mouse on the right appears younger because researchers have removed its senescent cells. Photograph: Jan van Deursen

Such findings have sparked pharmaceutical and biological companies to begin testing drugs, known as senolytics, that kill senescent cells; however, while there is a slew of additional, exciting research, there have been no such luck at bottling up the idea into an anti-aging elixir… yet.

Not to mention: should we find a “cure” or will this create a Dr. Frankenstein ordeal? Scientists grapple with the fact that some zombie cells are quite useful, such as in wound healing. If senolytics eliminate zombie cells without cellular replacement, there is no clear answer on the biological consequences of eliminating senescent cells.

Isoflavone: Known as a phytoestrogen and powerful antioxidant, this active is the perfect choice for combating the damaging effects of a pro-oxidant environment. Isoflavone helps prevent the destruction caused to collagen, elastin, and hyaluronic acid.

Complexion Plus Liposomes: Zombie cells prevent the removal of damaged cells through autography, however, the tranexamic acid found in this product counteracts this by stimulating autography, and removing zombie cells. The product contains a boastful amount of B3 vitamins and a slew of therapeutic benefits for aging skin and chronic inflammatory skin conditions.

Hyaluronan-NAG Liposomes: A combination of hyaluronic acid (HA) and HA’s precursor, N-acetyl Glucosamine (NAG), it addresses inflammation, pigmentation, and helps the skin synthesize its own hyaluronic acid, which supports collagen and elastin. This product also contains the nourishing ingredient D-Panthenol, which has been shown to stimulate fibroblast proliferation.

In addition to such corneotherapy, good sun protection, good nutrition, and exercise contribute to healthy, happy skin that keeps inflammation and premature skin aging at bay.

If you’re a spa or clinic in New York State, find out how our microbiome-loving products can find their way to your shelves! Get in touch today.

About the Author: Kathryn Mazierski

Kathryn Mazierski is a graduate of Brock University, a New York State Licensed Esthetician and member of the Society of Cosmetic Chemists - New York State Chapter. She is an internationally recognized Skin Barrier Educator and Corneotherapist. Kathryn brings to the professional skincare industry a deep understanding of skin barrier structure, function and formation, with an emphasis on treatment and prevention of skin barrier disorders. She currently lives and serves clinics in the New York State areas.